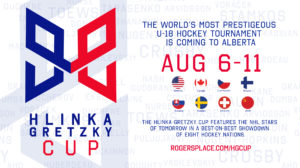 Front-of-the-line access for 7- or 10-game ticket packages available at RogersPlace.com

(Edmonton, Alta.) – Hockey Canada and Oilers Entertainment Group (OEG), with support from the Czech Ice Hockey Association and Slovak Ice Hockey Federation, announced today the former Ivan Hlinka Memorial Cup has been renamed the Hlinka Gretzky Cup in preparation for its debut in Alberta this August.

“Bringing such a prestigious tournament to Canada is made all the more special as it is in the memory of Ivan Hlinka. Ivan and his family have done a tremendous job of putting time, money and effort into making our sport better, not only just in Slovakia and the Czech Republic, but worldwide,” said Wayne Gretzky. “We’re going to have people come from all over the world to be part of this prestigious tournament in Edmonton and Red Deer. I’m honoured to share the name with a true trailblazer in hockey while continuing Ivan’s legacy of growing the sport.”

The Hlinka Gretzky Cup will feature 18 games over six days played at both Rogers Place in Edmonton, including the gold-medal game on Aug. 11, and Group B games at the brand-new Servus Arena in Red Deer.

“This is an important event for players as they progress through Canada’s Program of Excellence, and we are thankful to the Czech Ice Hockey Association and Slovak Ice Hockey Federation for their partnership in bringing this best-on-best, high-calibre event to Canada,” said Scott Smith, president and chief operating officer at Hockey Canada. “The rebranding of the event to honour two national hockey heroes reinforces how special this truly is, and we look forward to building on this event’s legacy for years to come.”

The Hlinka Gretzky Cup is one of the few best-on-best international hockey tournaments and features the premier under-18 players from some of the world’s greatest hockey nations – Canada, the Czech Republic, Finland, Russia, Slovakia, Sweden, Switzerland, and the United States.

Many tournament alumni have gone on to become stars of the National Hockey League (NHL), including Sidney Crosby, Patrik Laine, and Steven Stamkos. Edmonton Oilers Ryan Nugent-Hopkins, Darnell Nurse, Oscar Klefbom, Jesse Puljujarvi, Zack Kassian, Kris Russell, and Michael Cammalleri have all represented their countries in the tournament. Most recently, highly-touted Swedish defenceman Rasmus Dahlin, a top-rated NHL prospect for the 2018 draft, played in the 2016 tournament.

Historically, Canada has dominated the tournament with 21 gold medals in 27 years. Including the Soviet Union’s 1991 victory, Russia has won gold three times, while Sweden, the United States, and most recently, the Czech Republic, have secured one gold medal apiece.

“Through our partnership with Hockey Canada, OEG is thrilled to showcase not only the best players in our country, but the best players from across the world this August,” said OEG CEO & Vice Chair, Bob Nicholson. “To bring this calibre of hockey to fans at Rogers Place this summer creates a unique opportunity to build Edmonton’s international reputation as a destination for hockey and can be the building block to create other programming and educational opportunities, and, with our partner Red Deer, invite the world to our province.”

The Hlinka Gretzky Cup will offer two ticket packages at Rogers Place, a 10-game and a 7-game package. The 10-game package, starting at $185, will feature all six preliminary-round games in the pool that includes Canada, plus two semifinals, the bronze-medal game and gold-medal game. In addition, 10-game package purchasers will be invited to a private reception with Wayne Gretzky during the tournament. The 7-game package, starting at $140, will provide fans the opportunity to select three preliminary-round games of any of the countries in Group A (Canada, Slovakia, Sweden, or Switzerland) and also includes both semifinals and both medal games.

Ticket packages will go on sale to the public this spring. However, fans wanting to be front-of-the-line for public packages can reserve their spot immediately at RogersPlace.com/HGCup with a $50 deposit per seat. Edmonton Oilers and Edmonton Oil Kings Season Seat Holders will receive front-of-the-line access to the ticket packages. Purchase details will be communicated directly by the Oilers and Oil Kings in the coming weeks.

Details on individual game tickets will be announced closer to the tournament at RogersPlace.com.

Ticket packages for the Hlinka Gretzky Cup games in Red Deer will be made available exclusively to Rebels Season Ticket Holders at a still-to-be-determined date. Check out RedDeerRebels.com for details.

“Alberta’s hockey legacy makes it the perfect place to host this year’s Hlinka Gretzky Cup and welcome the tournament back to Canada for the first time in 22 years. Now named for two of hockey’s biggest international stars, both on and off the ice, the cup offers us an opportunity to recognize and celebrate the sport’s global reach and popularity. The Government of Alberta is proud to help support the tournament, inspire future generations of athletes and welcome the world to our province.” – Ricardo Miranda, Minister of Culture and Tourism

“It’s an incredible honour and opportunity for Red Deer to be a partner host city for the 2018 Hlinka Gretzky Cup. We are proud to welcome national and international hockey athletes, coaches, scouts, officials and spectators to our community. This tournament reminds us that supporting athletes and sport results in both community and country building, and that our partners are to be credited for the hockey history we’re building not only for Red Deer and Edmonton, but for our fellow Albertans and Canadians.” – Mayor Tara Veer, Red Deer

“The Rebels are extremely excited to partner in bringing another world class event to our fans in Central Alberta. In the lead-up to the 2019 Canada Winter Games, the Hlinka Gretzky Cup provides another opportunity to put Red Deer on the international stage. The brand new Servus Arena provides the ideal player and fan experience as we bring this event to Canada for the first time.” – Brent Sutter, Red Deer Rebels Owner/President.